Welcome to my series in progress about reversing a malicious PDF. Last time I worked through the first exploit, geticon(), and its shellcode payload. Next, I'll be looking at printf(), which is triggered if the user is running Adobe Reader 7.1. Here's the code:

Again, the payload is the appropriate shellcode variable I found previously (shcode_printf). It's different code this time, but it follows the same pattern. Build the NOP sled, this time in the variable nop. Append the payload to create heapblock. Build a bigger, 261310 character NOP sled in block. Create an array mem and populate it with 1400 copies of the full NOP sled plus heapblock to create the heap spray. Attack the vulnerable function util.printf, overflow the buffer and Adobe Reader hits the NOP sled and executes the shellcode.


This is an older exploit, CVE-2008-2992 made public in November of 2008. A patch was available at the same time the vulnerability was published.


Now, the fun part. What does the shellcode do? Like last time, let's look at the hex and see if there's any obvious URLs. 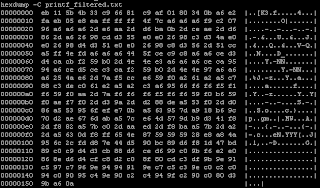 No such luck. Back to scLog to execute the shellcode. Executing the shellcode shows it loads shell32 to get the Temp path and loads urlmon to try (but fail) to download a file to Temp. Just like before, it tries to access /forum.php?f=PDF and passes along the exploit used (printf). Again, the file would have been saved as a.exe. Simple enough. 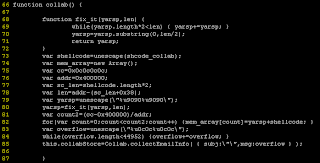 First, we have a function fix_it, which takes two variables: yarsp and len. It enlarges the string to twice len, then cuts it down to half len. Once again, the shellcode is taken from shcode_collab and stored as var shellcode. Variables cc and addr are set to hex numbers, and sc_len is set to twice the length of the shellcode (338). These are used to calculate the new variable len (equal to 4093910). All of this is leading up to the good stuff, beginning with var yarsp. This variable is defined with a few NOP codes, which is then run through fix_it with len. This extends yarsp to a real NOP sled, 2096955 characters long. The variable count2 is defined and a for loop is used to generate mem_array, which is the heap spray. Next, the var overflow is created and extended to 65536 characters. Finally, overflow is passed to the vulnerable Collab.collectEmailInfo() method to trigger the exploit. This is another old exploit, discovered and patched in 2007 (CVE-2007-5659)
So far, so good. Now, onto the shellcode. I run it through scLog just like the others ... and just like the others it loads shell32 to find the temp directory, uses URLDownloadtoFile to try to access /forum.php?f=PDF (Collab)&key=... and save it to temp as a.exe.
The first three exploits all followed the same basic pattern: create a big NOP sled, attach shellcode, replicate it a few hundred times into a heap spray, overflow the buffer and let it go. All the shellcodes had essentially the same function as well, download a trojan EXE to the temp directory. As a result, I'll leave the last exploit and shellcode as an exercise to the reader. :)
Posted by Alex at 2:37 PM